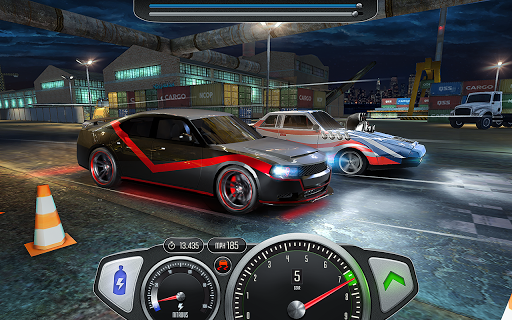 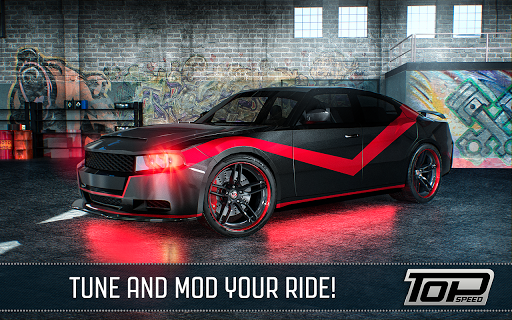 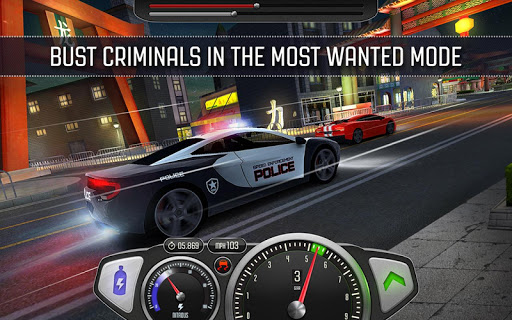 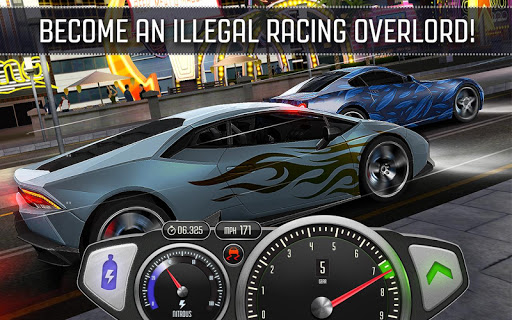 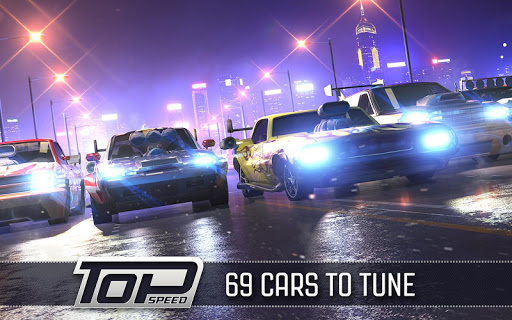 • Pick from 69 cars: stock rides, dragsters, and police vehicles
• Let your creativity flow through a ton of tuning and customization options
• Drive in 5 city districts, each with its own unique theme and gang crew
• A real-life inspired aircraft carrier to race on
• Epic arcade game modes
• Adrenaline inducing Most Wanted police chases
• Mind-blowing 3D HD visuals

Reach impossible speeds by expertly timing gear changes and bursts of nitro
Top Speed is setting the new standard within drag racing genre. Have you ever wanted to participate in underground races against unpredictable mafia mobs? Drive top class luxury cars and show everybody who’s the boss? Jump right behind the wheel and get ready to have your breath taken away the moment you push that nitro button.

Drive 69 cars, beat 20 criminal overlords and become the biggest fish in the city
In Top Speed you can tune and mod your ride to your liking. Increase the engine’s power, upgrade your gear and nitro, repaint your car, slap on some decals if you need to. All of it will have a definite impact on the realistic driving simulation. When you unlock elite dragsters you can also reach for the most hardcore visual mods from the black market. All of the goods from the criminal nation are at your disposal – you just make sure to make good use of them in the race.

Choose any car you want from an astounding selection of 69 rides – you can drive classic stock cars, new heavily modded dragsters and even national police vehicles from 5 different countries.

Nothing will stop you from burning the rubber on the streets. All races take place off the grid, away from the traffic, so you can get crazy with burnout, plow the asphalt and race with no limits.

Challenge the odds as a mafia underdog and make your way to the very top.
On every step, you’ll have to race against each of the 20 criminal overlords that keep the city in their steel grasp. The city’s asphalt will become a battleground and no limit will be placed upon you – let ambition and adrenaline be your guide in this race. You’re the best new racer on these streets, but your rivals still don’t know that. How about showing them that by leaving them behind in the smoke from burnout after you drop the nitro? Kids, don’t try this at home!

Drag race in 5 beautiful and distinctive city districts.
From quaint Suburbs to teeming with high life Downtown, your need for sightseeing will be satisfied. Drive for glory and adrenaline in the Little Asia district, a fusion of China and the western world. Reach incredible velocities on the scenic Highway. As a professional arcade racer, you’ll have plenty of opportunities to show off your ride in nice and realistic surroundings.

Your skills will be tested, so get ready for the most intense arcade racing game of 2017! Download for FREE now.

Turn on, tune it, race out!
This new update brings you a round of bug fixes and performance improvements! Race against other players worldwide! Are you ready? Update Top Speed NOW!