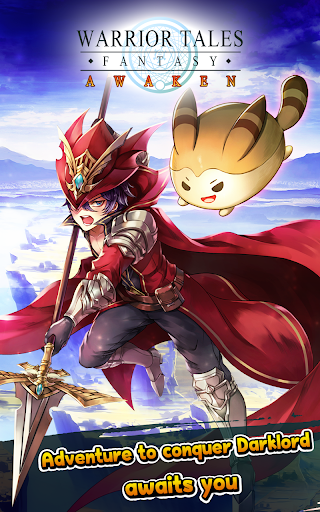 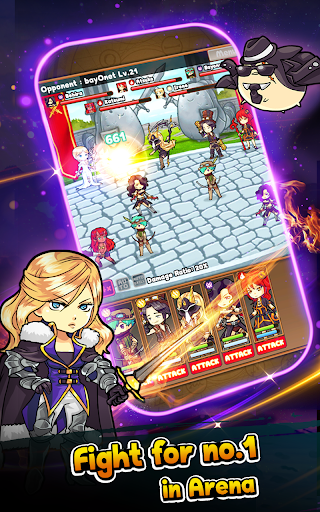 Meet a visually powerful RPG game like you’ve never experienced before! Warrior Tales Fantasy could be your next Arena to battle along in this action RPG.

Don’t miss the action and train your team right! Get on acquiring the special skills with the honor summoning RPG game and never miss a chance to make the Clash battle won right!

So, what is all the more exciting in this?
1. Honor Summoning: getting all the new avatars and skills enabled soldiers for your warfare game team that are 200+ in count!
2. Unimaginable Units: Ranging in the skills, powers and the varieties, there are loads of superpower enabled Units: the key factors to make every game a winning deal.
3. Your Custom Dream Team: Select and make your own team, remove anyone from the team as per your desire. Get them on the arena and watch all the fantasy fight action unfold!
4. Enjoy your warfare game while collecting treasures: Be it stardust, Zeny, potions, skills, a coin or any sort of exciting value like a gem, click right on the Shop button to get access to these things and off course what not!
5. Fighting: get your gang in this battle game along: Acquire skills and meet up with friends to come out of the arena as the winner of every single warrior game!
6. Enjoy the auto mode: Make the warrior game fighters get set to fight with their best ability making opponent disappear within no minutes in this Clash battle!
7. Save your Battle Strategy success by a single connection with Facebook.
8. A turn-based strategy, PVP and PVE enabled game.

How to play in the Warrior Tales Fantasy?
1. Arena Mode: Get set to use some of the skilled moves and beat the opponent and get declared as the winner with one click on the Arena button!
2. Safeguard or Attack: Make your team members safe in the world of war by touching the individual team member to see the “Guard “badge appear. Get some rest for them and let the others fight. Save power making the safe player get into the ground, helping others to rest for a while in this Battle Strategy.
3. Make use of some advanced buttons: Get the power hiked up and make your team face the battle in the pro mode. Use 2x to charge up the right skills and get on the lower mode of 1x to make your team relax and fight. Get set and click on the Auto Skill mode to see some grooves and skills that are to be used in this action RPG game!
4. Manage team: get set to add more members to world of war making your team rock and win every battle in the arena!

Let’s play! But why?

1. Not at all boring: This Mobile Game makes sure that you have a whole range of units and characters to play with.
2. Get the teamwork count: Fostering a sense of teamwork and its importance best to easily defeat the attackers and win the session.
3. A lot to explore: Just when you feel like, you have played it enough; explore more of this battle game to see there are still a lot of things to be explored more!
4. Nothing beats anything that is free: A Free-to-Play version available on the stores is worth going for when it purposefully kills time and helps in developing your motor skills!
5. Simply get on exploring the daily quests and events of rpg dragon and enjoy more than the simple Card games online

The already loved and played across the thousands of devices, fantasy fight game has a new name with a new version! With the continuous love and response gathered from our fans scattered all over the world, GAMEINDY is back in arena, with more of the units and more of power packed rpg dragon action! Play Now!!
• Optimizing game performance