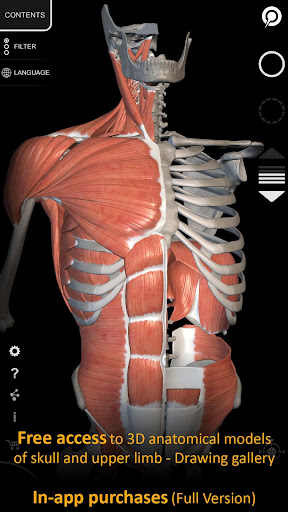 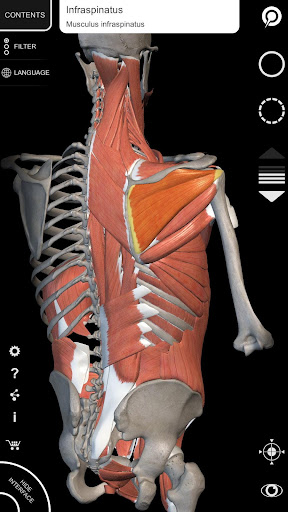 “Muscle | Skeleton – 3D Atlas of Anatomy” is a next generation anatomy atlas in 3D which gives you availability of interactive highly detailed anatomical models!
The musculoskeletal system has been reconstructed in 3D, you can rotate and zoom in on each model and observe in detail from any angle.
By selecting models or pins you will be shown the terms related to any specific anatomical part, you can select from 11 languages and show the terms in two languages simultaneously.

SIMPLE AND INTUITIVE INTERFACE.
• Rotate and Zoom every model in the 3D space
• The muscles are grouped into layers, from the superficial to the deepest
• Visualization of the muscle layers in multi or single mode
• Possibility to hide every single bone or muscle
• Filter feature to hide or display every system
• Intelligent rotation, automatically moves the centre of rotation for easier navigation
• Interactive Pin allow visualization of the term relative to every anatomical detail
• Hide / Show interface, ideal for use on smartphones
• Muscles descriptions (origin, insertion, innervation, action), in english

“Muscle | Skeleton” is part of the collection of apps for the study of human anatomy “3D Atlas of Anatomy”, new apps and updates are being developed.
Minor bugs fixed