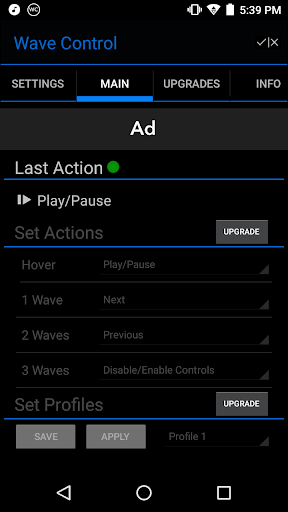 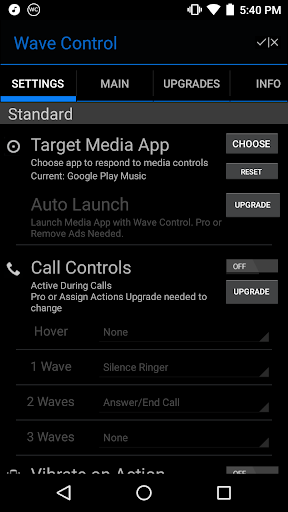 Control your music and video playback and calls with waves of your hand over your phone. No touching required. Control music with the screen off too.

Works with your favorite music/streaming and video apps.

Get air gestures today on the phone you have now.

This version has purchasable upgrades to pick and choose features as they become available. Pro version gives all current and future features at no additional cost.

Known Issues:
Galaxy Ace, Y, and Fit: Try a different music app for the list further down.
If Screen Off not working – Turn on Device Admin in Settings

Easy to use, just wave your hand over the sensor (usually located just next to the earpiece).
Holding it there (hover) – Pause/Resume
One wave across – Next Song
Two waves across – Previous Song
Three times – Enable/Disable the controls

Languages:
If you would like to help put Wave Control in your native language, please email me!

Player Compatibility List:
Any Music app that supports “Headset Controls” includes all the most popular apps.

Some Notes:
Tip for the hover gesture: if you move your hand away too quickly it’ll register a wave
After an action, there is a delay before another gesture will be registered
Practice your wave techniques in the “Last Action” section
If you’re getting another player responding to the commands, use the Set Target Media App setting

*IMPORTANT*
The sensor WILL behave differently on different phones. I don’t have the resources test on every phone. If there is a problem, please email me to give me a chance to fix it out before leaving a bad review!